The phrase “life long learning” gets bandied around a lot, and today I’m going to write a little about just how much learning is involved in moving job, school section, country, and home.

I left a country that was easy to live in (Singapore) and I job that I loved and was comfortable with for a place (Beijing) that generally led people to shake their heads in puzzlement, even as they acknowledged that the school I was moving to was something special.  Easy is not always good. I must admit I never really liked living in SG – it did not make my heart sing in the way that Hong Kong did. I never felt at home like I did in Hong Kong. And the only thing that kept me there for the last 3 years was a great job that kept me busy enough that the things that irritated me about SG didn’t bother me because I didn’t have time to be bothered.

Living Learning – my husband just announced he needs a haircut – what does that have to do with learning – well it’s just one of a myriad of daily / weekly / monthly things that one has to do in life where you have to relearn how it works and where to make it work. Of course the easy answer is – just pop into a barber or hairdresser – and that’s simple enough if you’re a no-nonsense type of short-back-and-sides-guy but just look in any Asian-expat forum for the pleas for hairdressers who understand curly / blonde / kinky / wavy hair and you’ll realise some things cannot be taken for granted. Like buying knives in Beijing. When you move here you need to surrender your passport to your employer for an extended period of time while all the visa work is sorted out. But no-one will sell you as much as a bread-knife without seeing your passport and registering it (history here – and I’ve learned something).  We’ve moved into our house already and we’re in camping mode until our shipment arrives – so a few kitchen knives are kind of important – luckily we have nice colleagues with knives – presumably purchased prior to the ban!

Then there’s spatial learning. Orientating yourself in time and space, just like the PYP teaches. The Beijing public bus system is amazing. And cheap. For the equivalent of 20-50 cents you can go pretty far within your zone. Compared to 25x as much for a taxi (even if taxi’s are way cheaper here than elsewhere). So it’s a real good idea to learn how the system works. But it’s not that easy. I got a bit of a reputation of being the daring bus lady in our first few weeks, and this is the true story of why. My husband and I, newly married, moved to Sao Paulo, Brazil in 1995. When we arrived we had no money, nearly no furniture and only his job. And if anyone follows South American economic history – it was just after the Plano Real, which meant that everything was super-expensive as the country came out of hyper-inflation, but the balance between cost and value was still being established. So there I was, stuck in an apart-hotel, without the wherewithal to attend all those fancy expat lunches and coffee-mornings, no car and no money for taxis. Oh, and after a 2 week Portuguese crash course I spoke next to no Portuguese and in those days not many people spoke English. And add to that, no smart phone, in fact make that no phone at all, as there was a 6 month waiting list and a $5,000 installation fee to get a phone line installed in your home, and no internet. So I used to walk down the road and get on a bus and drive that bus the whole loop and work out where it went and of what use it would be to me. I figured I didn’t have anything more pressing to do with my time (except find a job quickly); and I didn’t have any money, so there was nothing to steal from me, so what-the-hell.

These days it’s so easy. High speed internet, a “maps” app that works in Beijing, even for public transport and in English. But still you need to learn some stuff. Like the Chinese name for your compound / complex. The nearest bus stop. What time they start and stop and the frequency. If you need to change over, which combinations are the fastest at which time of the day. Whether it’s better to take a bus or the Metro or walk. The short-cuts and back streets. And how to cross the road without being killed.

There are still things I want to know. And I’m not there yet. Like what app to use for buses in advance – there are some great subway apps, like Metro Beijing  where you can put in your start and end points. Maps sort of works, there is a workaround where instead of a location you can look for “transport” and then “Bus Stops” and then click on the bus number and see its whole route. But that only finds the buses near to your location, which isn’t much good for advance planning. I also know you can get an app for your transport card, but I haven’t found it yet. There are some I’m sure, but only in Chinese. Which I’m still re-learning. I’ll do Chinese in a whole other dedicated post.

Work hygiene learning. I call it that based on Herzberg’s motivation theory, because it kind of makes sense and I don’t have a better way of describing it. It’s all the stuff besides the technical / knowledge bits of your job that you need to know to survive and thrive in your new environment. Now this is a pretty steep learning curve. Because every school has their own “untouchables”. I was asking a friend about a new person in another school and her conclusion was she had great ideas and enthusiasm but this wasn’t being appreciated. I sort of know the environment there and I can just see that happening. It’s a dynamic tension. You’re presumably hired to a job because they want your input, and in some circumstances for you to change things. But not too much or to soon. Or perhaps they do what a lot of change and quickly. But who do you ask? Who wants to tell you? There is this mutual dancing around things. Both my predecessor and myself to my successor deliberately didn’t say too much about the environment, because it is important to try and feel it out for yourself. And it’s also nice after a few weeks to be able to ask someone if your experience aligns with theirs – because it’s so hard to know if it’s “just you” or if there are other things at play.

Similarly in my mentor group (another “first” for me – having 12 students to nurture throughout the year), I’ve deliberately not looked at their records or files, as I want to take them as they are without history or labels and then move on from there.

Where to play. It’s not all about work, so our Newbie WeChat has been full of which restaurants are good to go to, where to have a massage, where the beer is cheap, nice parks to hang out in, bars and clubs for the night owls. This morning I was delighted to find the Beijing Greenway just minutes from our house with I think about 12km of walkway along the river through wooded areas with lush green and few people. 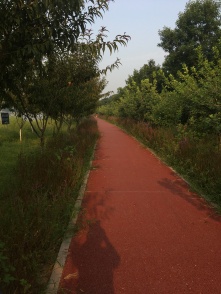 I’m seeing similar exploratory type posts on the facebook pages of friends who have also taken the plunge into the new and unknown. It’s easy to say it’s easier now we have the internet and facebook and smart phones and apps. But change and adaptation in reality is never easy because it has its own absorption rate. And even after moving around for the last 35 years, I’ll put my money on the fact that it will take at least a year. Because it always does. Except in Luxembourg where we only lived for 10 months!

If you’re new to this game, you may want to read up more on “culture shock“; the 5 stages of culture shock – honeymoon; culture shock; actual adjustment; isolation period; acceptance and integration, the W curve etc.

We were lucky to learn this all at the Royal Tropical Institute in Amsterdam prior to our moving to Brazil. And they also gave us one of the best tips ever – which was easy to implement in 1995 when flights were expensive and phone calls cost at least $5 per minute – and that was – not to have contact with home in the first 6 months. That’s pretty unbelievable in this day and age, but it probably helped with the move and integration.