This phrase is attributed to Peter Drucker and made famous by Mark Fields (although can’t easily be authenticated). I firmly believe it to be a reality both in business and education, and many a manager has been burnt by this.

I’m currently in Bangalore, having spent the last three days at the Neev Literature Festival  where I had the honor to be invited back as a speaker / workshop leader and as a jury member of the inaugural Neev Book Award. It was touch and go whether I’d be able to attend, given that my passport has been tied up with either visa or customs arrangements since the beginning of August, but a little more than a week ago I got the go-ahead! I’m so glad I did. You see Neev is a very special place. Many schools claim to promote a culture of reading and spend vast amounts of money on classroom or central libraries. But sometimes to no avail as the individual teachers or heads don’t actually walk the walk. 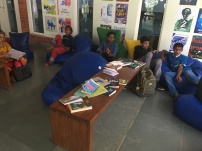 Here the founder really and truly believes in reading, and has invested immensely to ensure that reading permeates the school – what other school hosts a free literature festival at their premises, flies over authors, illustrators, librarians, storytellers, interpretive dancers and then invites other schools and the public to partake of their largess?  I was talking to their new head last night, about admissions, and she said they were in a luxury position where demand was greater than supply of school places and one of the ways they decided on who gets a seat was based on the families being able to demonstrate that they supported a reading culture at home! Imagine that! Not portfolios, or CV’s or admission tests. And it shows. Listening to the young students as they described their reading lives I was astounded at the depth and breadth of their reading.

I spent the morning today with a few of the visiting authors, and one – the wonderful Nadia Hashami,  was telling me of a conversation with a reader who had read her book twice and was recommending it to everyone, and who had also attended her panel on “Protect or Prepare” difficult topics in literature – the discussions, chaired by Katie Day were around which topics could or should be out of bounds for children. This young lady’s take on it was that death was a part of life and had a place in literature as it was part of a normal life, however, she could not come to terms with rape and sexual violence because it was something that one would never want to be part of your life and which would never leave you or have a resolution. Astounding the maturity and empathy (some USA people could do with a little more empathy-powering literature obviously).

I had my own encounter with culture, which I’d like to reflect on. I did a workshop for 11-15 year olds using empathy mapping. I had the luxury of around 20 students and 90 minutes. So my strategy was to do a warm-up exercise by introducing the concept of empathy mapping using gender, and trying to take the view of the opposite gender based on what to Western sensibilities are rather sexist advertisements about mother/daughter bonding over dishwashing and father/son bonding over dude stuff like fishing and hanging out outside and drinking beers. It had worked extremely well in the international school environment I was coming from. But I hadn’t done my homework and had it “sensitivity tested” by my Indian friends … I quickly discovered that young Indian ladies (bar one or two) think that it is lovely to be able to bond with your mother over household chores, and that generally the students never needed to do chores, being of a class where chores were done for them by others! With a bit of prompting and help from my friends and the students’ teachers we managed to successfully complete the exercise and move on to phase 2 which was a reading of “No one walks on my father’s Moon” . It is a difficult text, despite being a picture book. However I like to use it, as even without an accompanying empathy mapping exercise, it provides a very powerful message of reconciliation and perspective taking.

This time the exercise really did work – on reflection, the “warm up” possibly did help the  success, despite not being optimal, because the students just weren’t used to giving their own views and in the first half kept looking to the adults for the “right / expected answer”. We had some powerful contributions from the groups, and some very interesting movement from utter condemnation for the father’s behaviour to understanding and empathy for the context and actions. And also the feeling that they could use this in their personal and academic lives.

Here’s a copy of the presentation – I believe that empathy cannot always be taken for granted despite the great potential of literature and us very much wanting it to be so. Hopefully this helps us and our students to take a step closer into “climbing into someone’s skin and walking around in it”